Legacy of Discord: Furious Wings Celebrates 1500 Days In Style YOOZOO Games, 17.04.2020 | 4 years after its release, LOD continues to go strong as the number one mobile ARPG in 90+ countries worldwide, including UK, Brazil, Germany and Russia (based on App Annie Google Play Grossing Rankings). To celebrate 1500 days of next-gen mobile battle, players are invited to celebrate in-style. For comrades wanting to spread the love, take advantage of the opportunity to send Greeting Cards in-game during the birthday celebrations. Take advantage of a brand-new gameplay mode that will be made available during the anniversary update. Dubbed ‘Football Fury’, it’s a crossover between ARPG battle and…. NFL? Taking the form of a cross-server PVP 3V3 event, the aim is to gain possession of the ball and score points. 1 point for every time a player holding the football runs into the opponent end-zone. When a match ends, the team with more points will be the winner. But be wary, there’s a quirky childhood games twist to it. Slip on one of the Banana Peels and you’ll not only lose the ball, but also become temporarily stuck in the mud. Get caught in the Asphalt trap and have your speed reduced temporarily. Slip in ink and your actual screen will be covered in ink for a period of time. We’re also excited to see some brand-new equipment coming out. You’ll have to collect the necessary pieces to unlock Galactic Armory. Each piece contains an Astral Path and Avatar, both of which offer bonus attributes. Personally we’re looking forward to seeing the astral slots on the sacred beast Avatar, which have an illuminate style feature. Illuminating the astral slots unlocks Critical Damage, and unlocking the avatar itself will block fatal damage, recover HP, and even offer temporary invincibility. In total there are 3 types of avatars up for grabs, each of which has different trigger requirements. Take your pick, as each player can only equip one avatar. About LOD Legacy of Discord - Furious Wings is the first fantasy action RPG mobile game published by YOOZOO GAMES. Developed by Fancy Guo’s Gold Studio, it is the first mobile game in China built using Apple’s Metal API and features stunning 3D graphics thanks to Fancy Guo’s own proprietary Fancy 3D engine. Legacy of Discord lets players experience intense real-time combat as they hack, slash, and blast their way through beautiful fantasy world. Players can party with friends to raid treacherous dungeons or clash against rivals in the Arena and open PvP battlegrounds. Characters can choose from hundreds of equipment, character skins, wings, pets, mounts, and many more customization options. 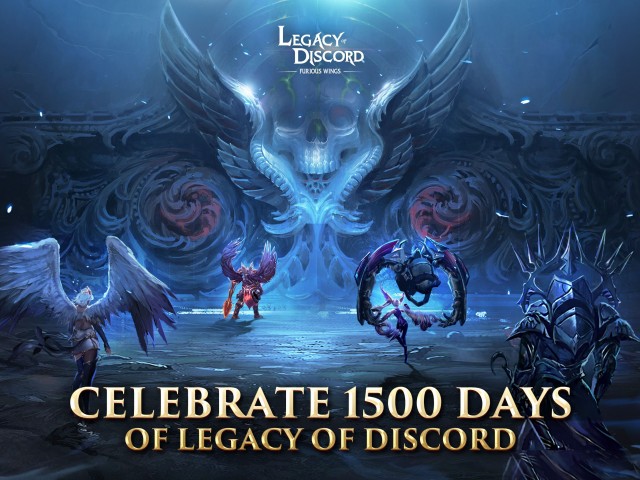