1st February, 2018 – Yoozoo Games and Ubisoft announced a new partnership today that will bring Assassin’s Creed characters to the popular mobile MMOARPG Legacy of Discord – Furious Wings. The first assassin, Ezio, will make his appearance in the next game update next week. 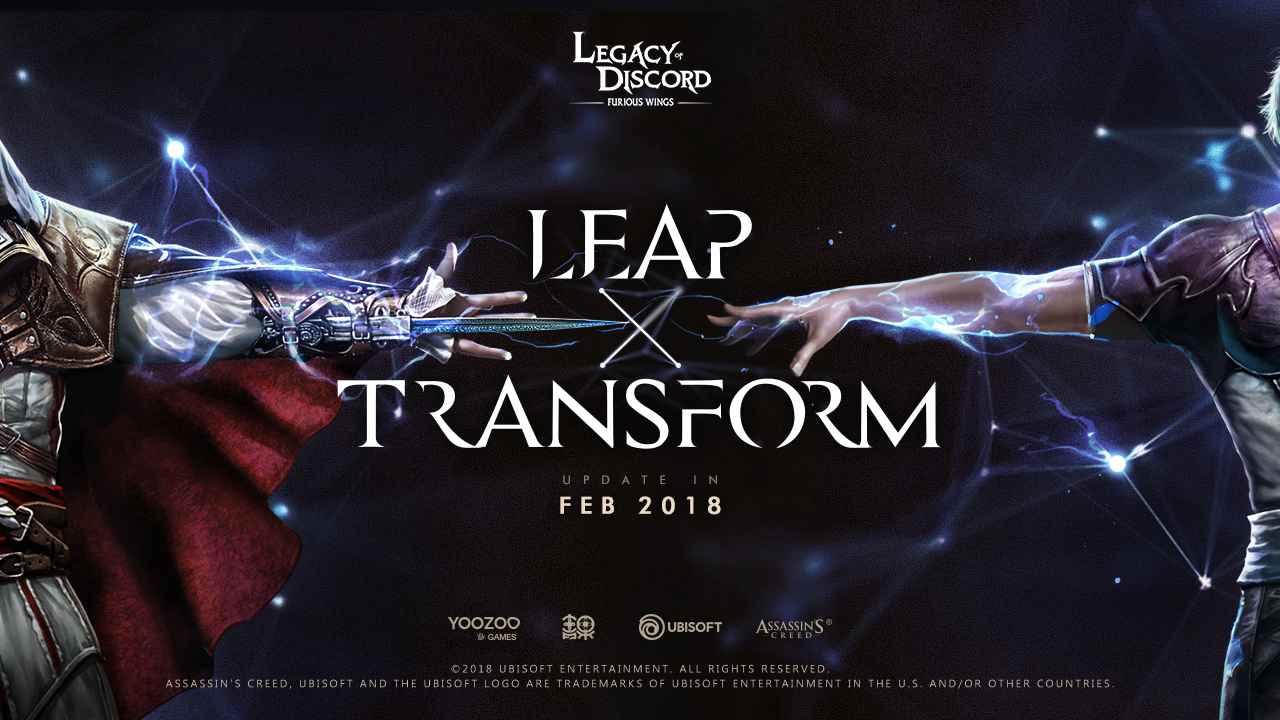 Assassin’s Creed is an action-adventure series set in fully realized open worlds, throughout notable times in history such as the Third Crusade, the Golden Age of Pirates and the Industrial Revolution. Initially launched in 2007, the Assassin’s Creed franchise has since transcended video games to offer new and immersive experiences in comic books, mobile games, novels and even movies. Recognized for having some of the richest, most engrossing storytelling in the industry, Assassin's Creed games have sold more than 105 million units worldwide, and the franchise is now established as one of the best-selling series ever.

"Assassin’s Creed is a global multimedia franchise with fans all over the world, many of whom from China. This partnership with Yoozoo originating from China but targeting the global market, is a testimony of the universal appeal of the I.P. come the update, Legacy of Discord - Furious Wings players will be able to transform their characters into some of the most iconic Assassins and kick ass with the game’s metamorph system. We have worked very closely with Yoozoo to create this exclusive content, and we hope that it will not only satisfy the fans but also appeal to non-fans as their first experience of the Assassin’s Creed franchise, and encourage them to delve deeper into its rich and expansive universe.” said Aurelien Palasse, Head of Game Publishing and Consumer Product, Ubisoft.

Legacy of Discord – Furious Wings is a mobile 3D MMOARPG globally published by Yoozoo Games. Since its launch in late 2016, nearly 70 million guardians from over 190 countries and speaking 15 different languages have fought in the universe. According to App Store and Google Play, Legacy of Discord – Furious Wings is one of the top 5 grossing mobile games in 106 countries and regions. The game has rapidly become the top-grossing mobile ARPG in Europe and the Americas and has been featured by Google Play and App Store for thousands of times.

The collaboration highlights the Metamorph System in Legacy of Discord – Furious Wings, which allows players to transform into legendary creatures and unleash their ultimate powers in battles. The system breaks through the limitations of ordinary design and takes the fighting experience to a new level. Ezio, the first character from the Assassin's Creed saga, will be joining the game in the next update. Players can use Metamorph to transform into Ezio with exclusive skills and dazzling special effects, giving the enemy a fatal blow.

In accordance with its IP development and cooperation strategy, Yoozoo Games has acquired the copyrights to China’s first science fiction masterpiece “Three Body” and exclusive distribution rights in China for browser and mobile game adaptations of the famous Japanese IP “Touken Ranbu -ONLINE-”. At ChinaJoy 2017 Yoozoo Games announced that it has been authorized to develop “Game of Thrones” mobile games together with Warner Brothers. According to Liu Wanqin, Vice President at Yoozoo Games, Yoozoo’s publishing covers North and South America, Europe, Asia, and the Middle East. With this broad coverage of over 190 countries and regions around the world, Yoozoo will adhere to its IP strategy, building and strengthening cooperation with global partners.

Yoozoo Games, formerly Youzu Interactive, is a global entertainment company specializing in game development and distribution. The company is headquartered in Shanghai with offices in London, Berlin, Hong Kong, Singapore, and other major cities. Since its founding in 2009, YOOZOO has launched a multitude of highly successful products and forged a global distribution network.